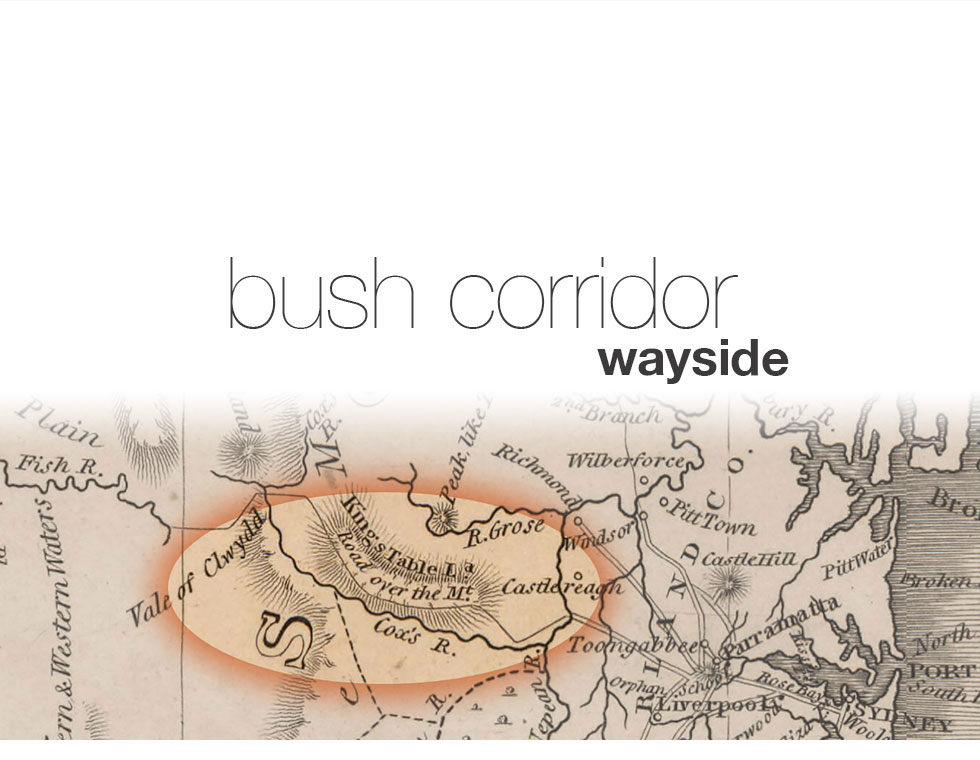 The construction of the “Road over the Mt.” in 1814 took one of a network of traditional Aboriginal pathways and turned this into a route over which wheeled vehicles could travel. People could still walk/ride along a diverse array of mountain access routes, however when it came to the movement of goods and materials there was only one option to follow. 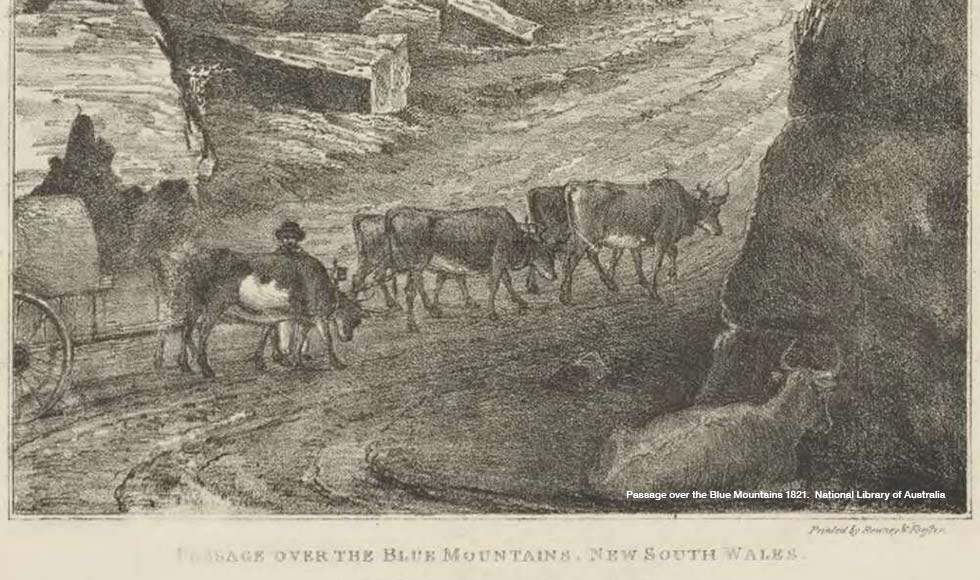 The 50 mile section of road from the ford on the Nepean River to the Hartley Valley became the magnet drawing settlers and commerce out of the Sydney Basin to the lands west of the mountains. With horse riders typically able to travel 30-40 miles a day across hilly formed roads, this made the mountain crossing an overnight outing at best. Bullock teams by contrast needed to make camp every 9-10 miles in their week long trip over the range.

In 1835, the Sydney Herald helpfully published for the guidance of travellers a list of the licensed premises located across the Mountains. Pembrokes at Twenty Mile Hollow is positioned 55 miles from Sydney, 10 miles west of Fitzgeralds Valley (Springwood) and 8 miles east of Weatherboard (Wentworth Falls). 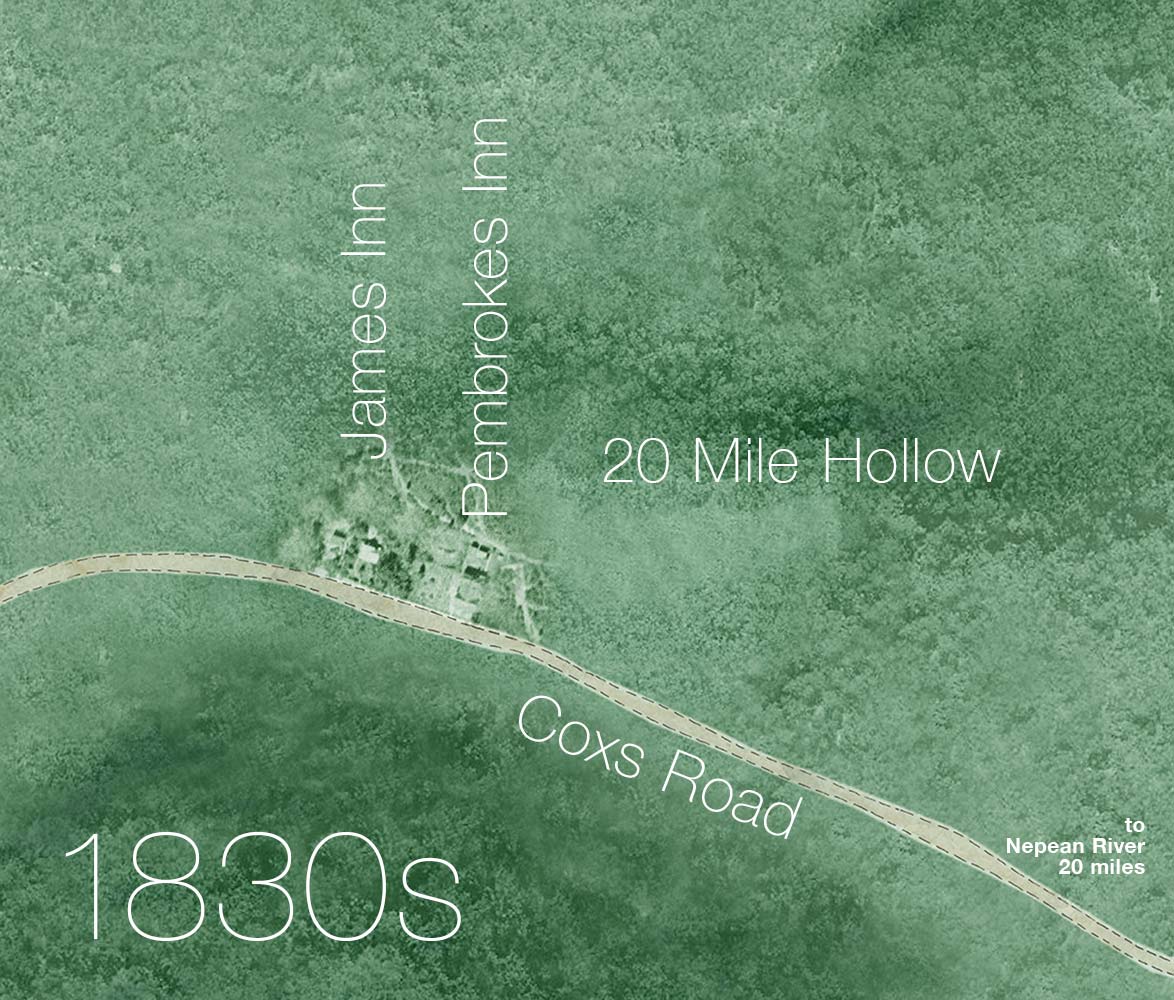 While Pembrokes was the only licensed in at Twenty Mile Hollow in the early 1830s, it did initially have some competition from the James' sly grog shop which was the original occupant of this prime roadside location
... more

It’s hard to credit today just how difficult the final run into 20 Mile Hollow was for both explorers, road builders and travellers alike in the early 1800s.

Whereas today both the road and railway line contour around the hillside past Bulls Camp, the original route had several steep set downs and jump ups that would have been prone to washouts.

The risks travellers faced because of this were highlighted in a newspaper report in January 1835 that noted:

“But a more serious accident had occurred a few days before; for a bullock-driver, when conducting his team and dray, which was heavily laden with wool, down a steep part of the road near the Twenty mile-hollow was killed on the spot by the overturning of the dray, in consequence of the prodigious inequalities of the surface. The poor man lies buried by the way-side, and I trust his solitary grave will long remind the colonial authorities of the necessity of keeping the mountain road in better repair.”

By the mid 1830s under the auspices of the new Surveyor General Thomas Mitchell, the Emu Plains entry and the Mount Victoria/Mt York exit off the mountains had been massively improved.

As a newspaper correspondent noted in 1835, “The mountain-road from Emu Ford to Spring-Wood is comparatively excellent ... but the portion of road from Spring-Wood to the Weatherboard Hut ... is execrable in the extreme.”

Even as this newspaper report went to press in 1835, convict chain gangs working on the roads were being relocated from Emu Plains to “Caleys Repulse the Seventeen Mile Pinch” to start work on the major road realignments needed to bypass the rocky ridgetop alignment of the original Western Road around the head of Woodford Creek (as it was later named).

This event marked the beginning of an eight year period where the inn at 20 Mile Hollow found itself centrally located immediately west of a major construction site. With 50 officers attending to the convict stockade at 18 Mile Hollow, the licensed premises just 2 miles away would have been well frequented.

By the time the new Superintendent of the “ironed gang” – John Edward Newell Bull – was appointed to take charge in November 1842, the inn also provided accommodation for the road gang’s commanding officer. Bull arrived on site in the final stage of the roadwork project and within two years was overseeing the relocation of the Bulls Camp “ironed gang station” to its new operational base at Blackheath.

The presence of the nearby road construction operations would have been a major benefit for the “Inn at Twenty Mile Hollow” as it traded through the dark days of the depression years that gripped New South Wales in the early 1840s.

As land values slumped due to drought, land ownership title issues and a drop in the price of Australian wool, wheat and livestock being sold to Britain, a credit squeeze took hold. Wages fell and unemployment rose.

With 50 thirsty stockade guards based nearby and the convict gang superintendent in residence at the inn, the impact of travellers going by with less disposable income would have been at least offset.

By the time that the convict gang was relocated to Blackheath in 1844, the worst of the depression was over. A traveller's account from 1848 later speaks of both the quality of the roadworks Capt Bull left in his wake and the nature of the hospitality on offer to travellers at the inn at Twenty Mile Hollow.

Indeed he suggests people don’t enter these premises as "the place is so hospitable that you’ll never complete your intended day’s journey from Springwood to Weatherboad Inn" (Wentworth Falls).