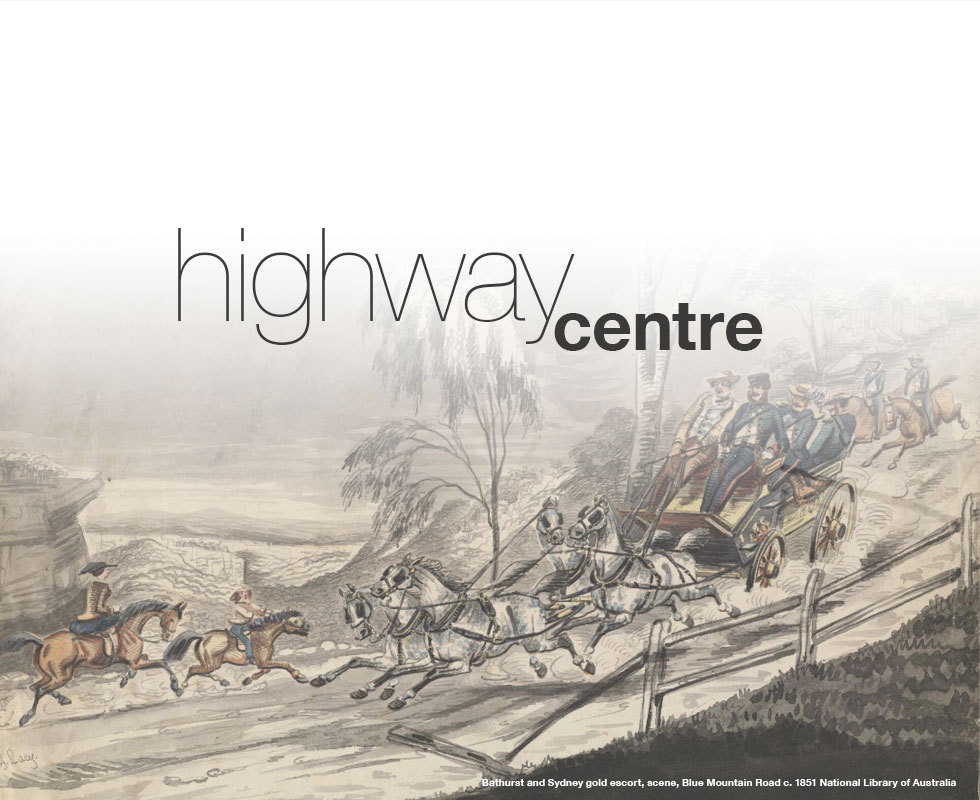 Prior to the discovery of gold north of Bathurst in 1851, passage across the mountains road tended to be a relatively considered activity. Many travellers had their own horses thereby ensuring they could get across the mountains in two days. Haulage contractors with bullock teams were used to being self sufficient in the week or so it took them for a crossing. 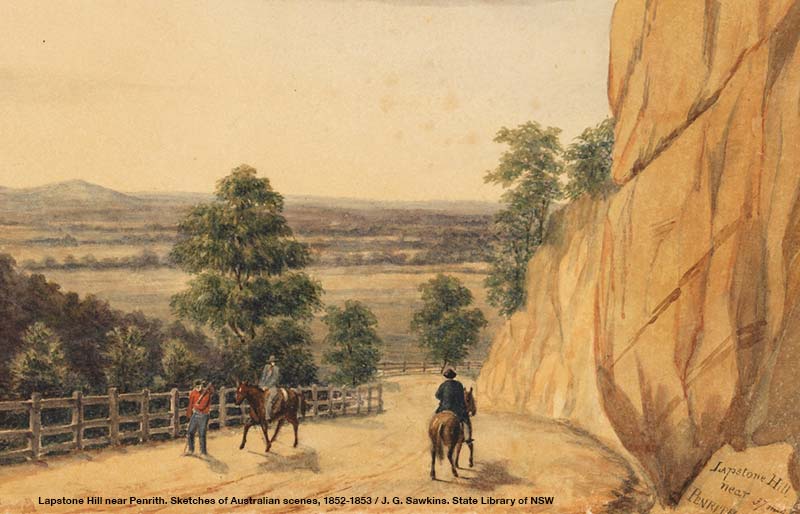 All this changed with the discovery of gold north of Bathurst in the autumn of 1851. In the mayhem that followed the road across the Mountains from Sydney to Bathurst was packed with would be gold seekers in various states of preparation and diverse speeds of transit.

These travellers often had no choice but to “accept the accommodation afforded by the overcrowded wayside inns in those parts.” With demand exceeding supply, the conditions were primed for additional service providers to start up businesses along the Western Road. 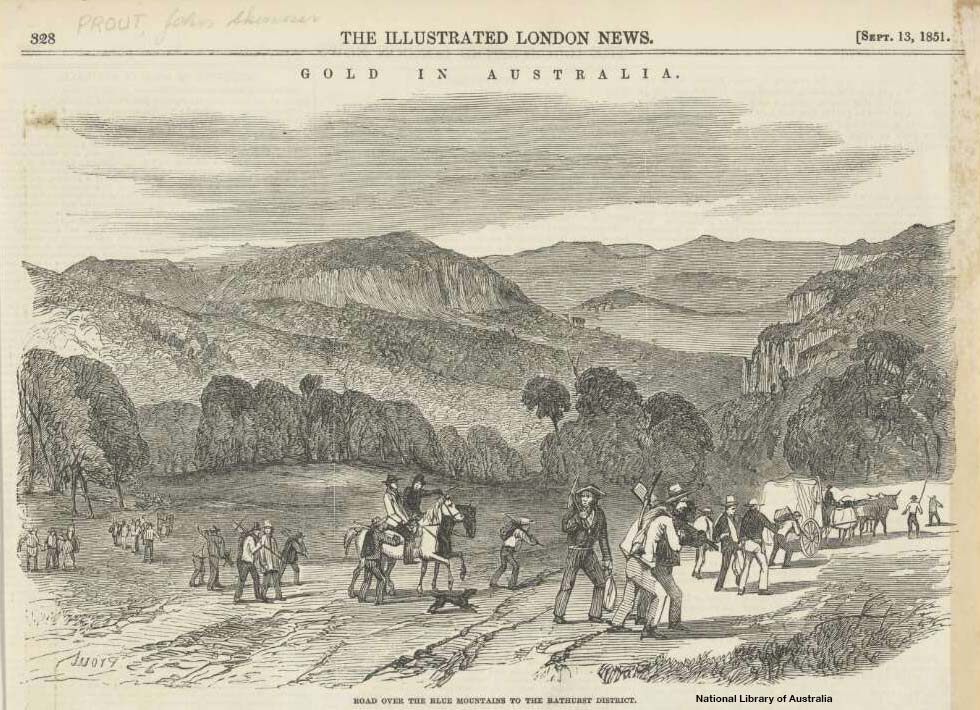 As one report noted in 1853 in a trip across the mountains “there are many beautiful little inns which the coaches either pass altogether or stop at for a few minutes, where a person travelling ... could make himself particularly comfortable.”

In the longer term these new start ups meant competition for the established places like the Kings Arms Inn at Twenty Mile Hollow with the advantage of its precious liquor licence.

In the opening years of the 1850s however, lack of trade was definitely not an issue that the well established mountain innkeepers needed to worry about.

1855 was a pivotal year in the history of 20 Mile Hollow. It was in that year that the absentee landlord of 16 years – Michael Hogan – profitably sold his 50 acre property to William Buss and his wife Bridget for the sum of £1040.

This meant that new live in owners arrived on site armed with a range of ambitions to upgrade and develop the full potential of the premises at a time when the initial pulse of gold seeker traffic was dropping back in favour of less hectic but more predictable patterns of commercial activity.

To help fund the significant property improvements he undertook, Buss took out a mortgage of £500 in 1858.

Coinciding with – and even possibly influencing their decision to purchase the property – was the move then underway to relocate the central mountains lock up from Weatherboard (Wentworth Falls) down to the vacant block of land next door immediately west of the inn. 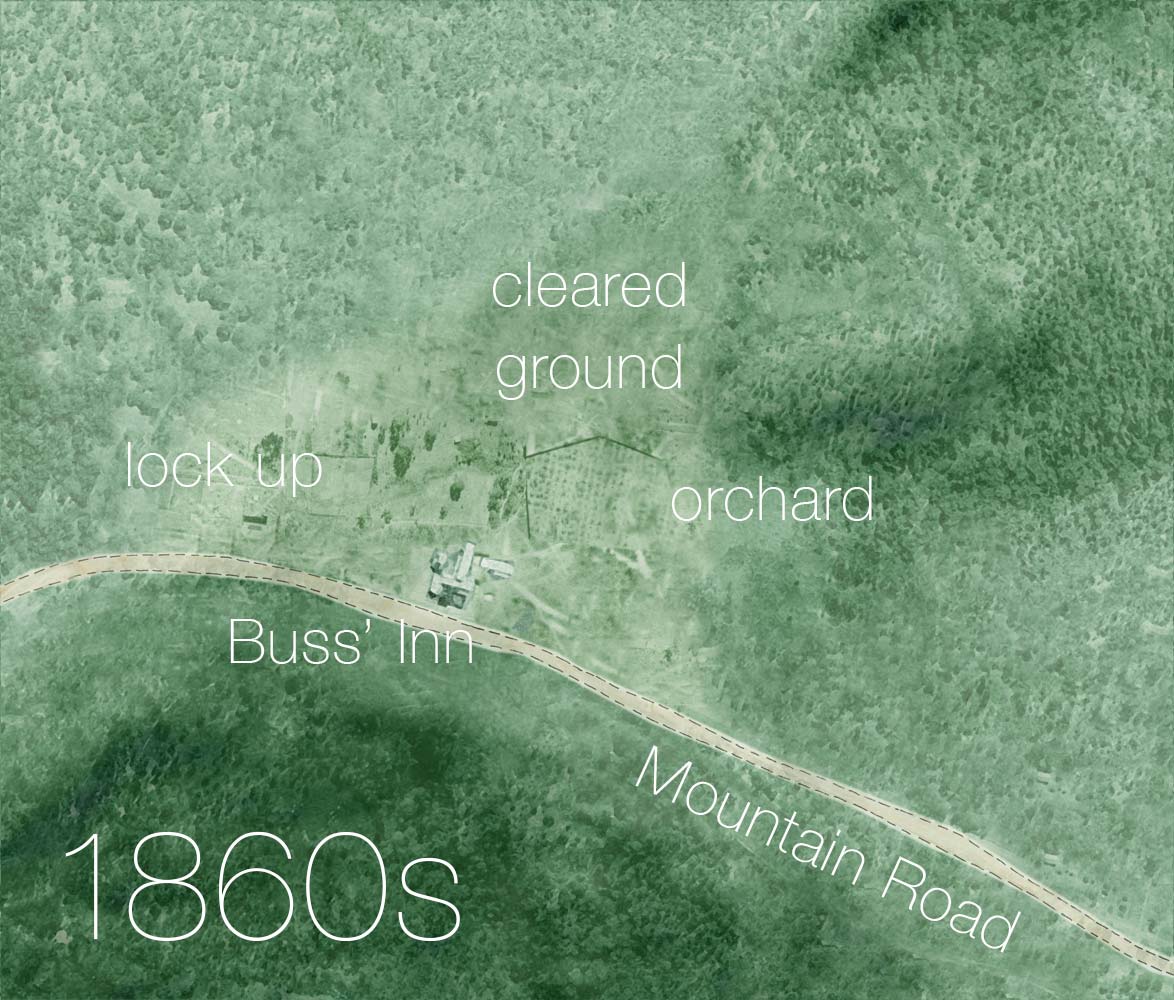 This was the same block of land that had been the location of a sly grog venue run by William and Mary James in the early 1830s.

The construction of the new lock up there may have been hastened by an incident in late 1854 whereby three convicted felons in the process of being conveyed by the gold escort had tunnelled out of the lock up then located up the road to the west at Weatherboard (Wentworth Falls).

As a newspaper report dryly noted “Delinquents are captured at considerable trouble, prosecuted at great expense and as now appears to be the rule, forwarded to the Blue Mountains to be turned loose upon society.”

The construction of a new lock up facility at 20 Mile Hollow presumably went some way to addressing these failings, while at the same time positioning the location as a crucial staging depot for the gold escorts.

Two days before the end of the goldrush decade that was the 1850s, the Bathurst Electric Telegraph opened for business.

This momentous event of a telegraph line opening across the Blue Mountains to connect Bathurst and Sydney was however just the first of a series of infrastructure innovations that would in their turn become the indelible markers of the new decade.

By winter 1860, the Western Railway line was extended as far as Blacktown and planning for the construction of the rail line over the Blue Mountains was well advanced. The roll out of the mountains rail crossing in the 1860s ushered in an entirely new phase of community development for the region.

It also put a permanent dividing line across the ridge crest in a way that was to split both present and future villages in two, separating out those places north of the line from their immediate neighbours to the south. 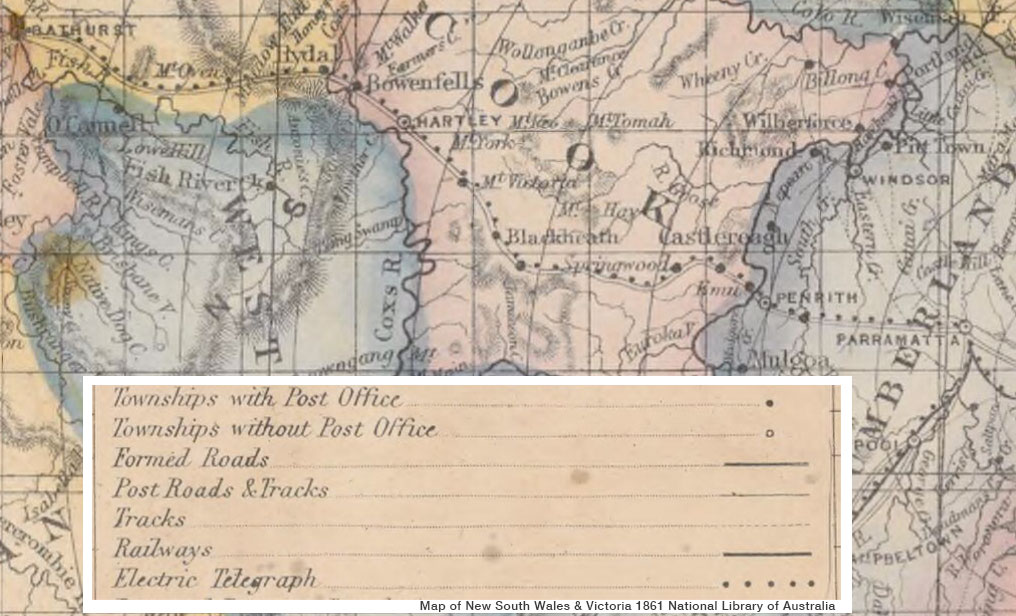 The status quo of the mountains at the start of the 1860s is neatly summarised in the map here dating from 1861. It shows the location of the new telegraph line and indicates those towns with a post office.

It indicates that of all the pioneer inn locations across the mountains, only the one at Twenty Mile Hollow had failed to establish a foundation as a civic centre in its own right. This was to have significant implications for both the value of the existing investments at the Hollow and also for its future development.

A feature of the work involved in the construction of the new railway across the mountains was a detailed survey of the land along the ridgeline through which the railway would travel.

In addition to providing us with a precise snapshot of the buildings comprising the Kings Arms Inn, the plan indicated the location of the 1856 Watchhouse and its adjoining horse yards.

This especially interesting as the plan was made just one year after the NSW Police Force was established in 1862. This move brought with it a major re-evaluation of many of the law enforcement operational activities then in place across the state.

In the light of this development, the significance of the watch house to local operations seems doubtful and the land was sold in 1871. 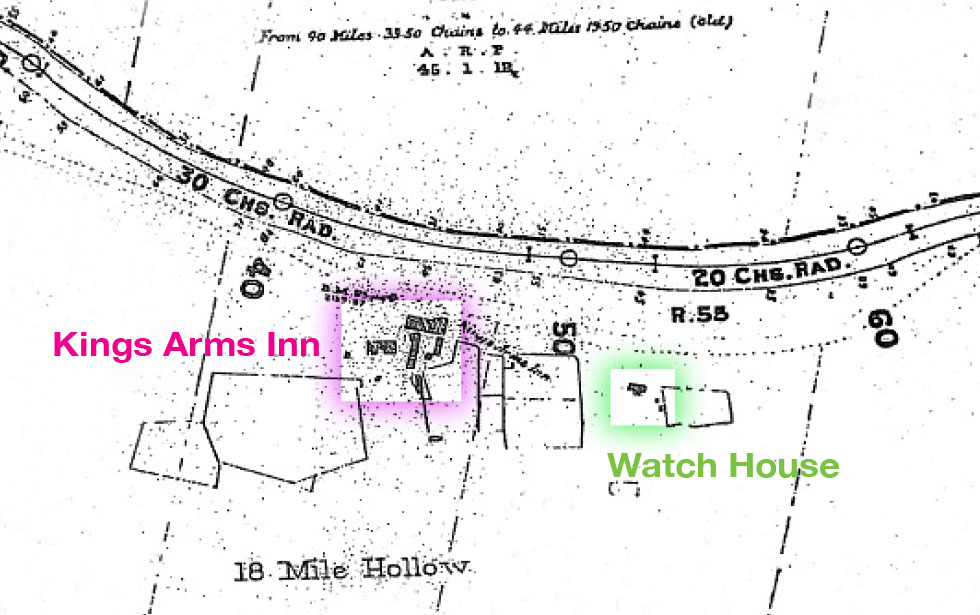 The plan identifies the locality as 18 Mile Hollow – a confusing juxtaposition that crops up in various places.

18 Mile Hollow is more generally understood to be Bulls Camp. The survey shows the same “Watch House” as shown on the 1856 plan.

In relation to the Kings Arms Inn it shows it comprising the present day East Wing, West Wing Dairy and Kitchen Wing in addition to a number of now demolished structures and enclosed yards

This was a relatively remote location for the construction camp at that time and as a result the contractor set up their own on site store to allow the workers to purchase the groceries and supplies they needed.

Having a drink after work however was one service they could not offer. Fortunately licensed premises were just a mile or two away at the Buss’ Kings Arms Inn to the west and this patronage doubtless boosted the Inn’s cash flows during the two year construction period 1863-65.

Indeed, the establishment of the construction camp just next door in 1863 may have influenced the Buss’s decision not to keep their Kings Arms Inn on the market after it was initially advertised for sale in the winter of 1863.

With the longer term value of their property in doubt owing to the anticipated decline in road traffic upon completion of the railway, they may have simply decided to enjoy some profit taking as a reward for the major investments they had made into their property over the previous seven years. 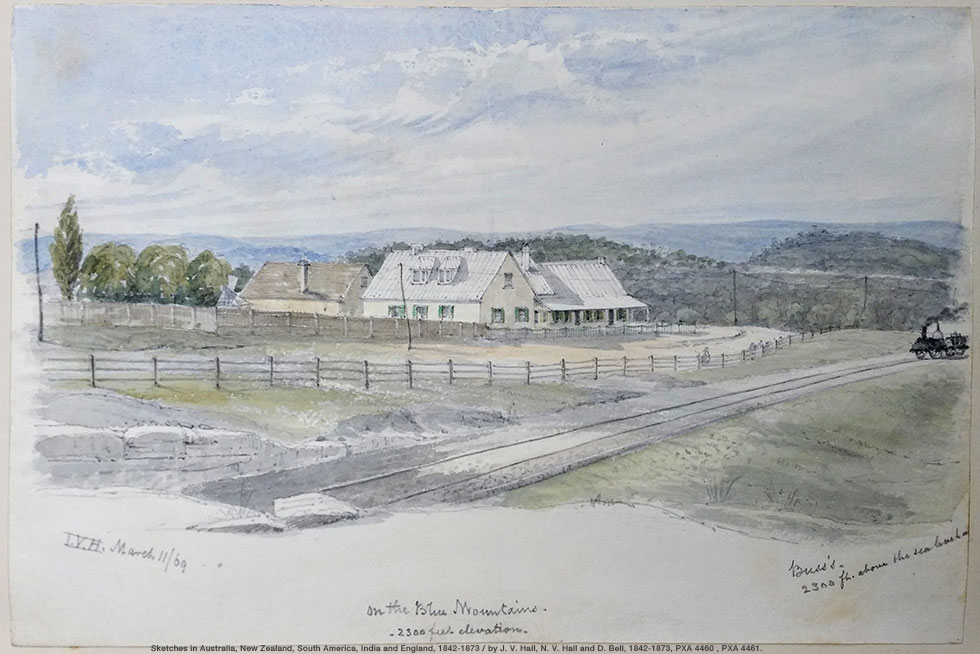 Two months after the official railway opening party travelled past the Kings Arms Inn en route to Weatherboard (Wentworth Falls) in late August 1867, William Buss died at home aged 59. Over the previous twelve years, he and his wife Bridget had made significant improvements to the property since purchasing it from Michael Hogan in 1855 for £1040.

The results of their efforts are evident both in the 1863 sale advertisement resulting from a short lived attempt to sell the property and also in a detailed watercolour painting featuring the new trainline. In addition to the upgraded and extended buildings detailed here, the grounds boasted stabling for 40 horses and a garden / orchard of about 1 acre in extent. Six acres of ground were also under cultivation to provide stock feed.

Bridget Buss sold the property in the following year to Alfred Fairfax for £450 – the same price it had first sold for back in 1839. It had been the property’s previous owner – Michael Hogan – who had reaped the gold rush bonus for the premises on offer in the early 1850s. Bridget retired to her farm of 60 acres on the banks of the Nepean with her two spinster daughters Sarah and Honora and died age 80 yrs in 1902.

Interestingly, Fairfax did not initially run Woodford House as his private retreat and he may not have even named it.

The site was for a time managed by John and Margaret Shiels with particular reference to the rail access and health advantages. One of a series of advertisements that were run across spring 1868 noted:

“MOUNTAIN AIR - J SHIELS begs to inform his numerous patrons that he has taken, in connection with REGENTVILLE, the house so well known as BUSS’S, on the Western Road, which will in future be called WOODFORD. The excellent apartments, situation for health, and convenience of access by rail, present advantages to families and invalids unequalled in the colony.”

At the end of the 1860s if you left central Sydney and travelled steadily west on horseback, a five hour journey would get you halfway to Penrith. Alternatively you could catch the train and be standing on the western edge of the Blue Mountains at Mt Vittoria (Mt Victoria) in that same time.

A year later in 1870 with a new timetable in place, you could leave Sydney at 8am, travel to Weatherboard (Wentworth Falls), spend six hours visiting the famous views out over the Jamison Valley and return to Sydney by 10pm.

These carefully timetabled tourist outings were part of a clear strategy for the railways to start recouping some of the enormous costs of their construction. Likewise they looked to the freight carrying capacity of the rail lines to reap a profitable return.

Not only were the platforms built at Wascoes (Blaxland), Springwood, Buss’ (Woodford), Blue Mountain Inn (Lawson) , Weatherboard (Wentworth Falls) and Blackheath available for foot traffic - they could also put down horses and buggies.

As the Sydney Morning Herald noted in August 1867: “A large quantity of goods is conveyed both up and down the line – and no wonder considering the desperate state of the road over such a mountainous district.”

Clearly with the new rail line in place that road in desperate disrepair was not going to get better any time soon.

This left highway focussed service providers like the travellers inns needing to reconsider their business prospects at the start of the 1870s.