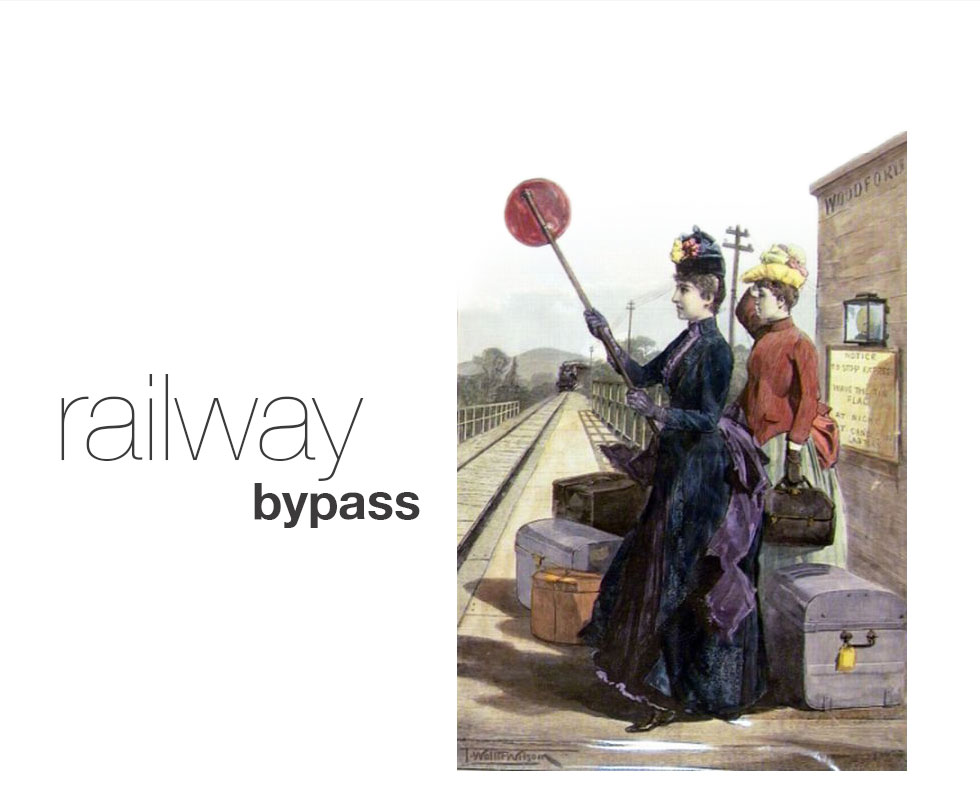 The dominant shift from highway travel to train travel in the 1870s effectively meant every mountains’ locale was bypassed. People no longer naturally went through places as they crossed the mountains.

Now a mountains’ location was either your destination, or else simply a passing blur seen through the window of the railway carriage.

This new dynamic ushered in an existential change in relation to why, when, where and how people connected with places in the Blue Mountains. Twenty Mile Hollow – or Woodford as it was about to become – today stands as a mirror to these tumultuous times.

Alfred Fairfax probably had several things in mind when he purchased the former Kings Arms Inn and its 50 acre holding in 1868. The first was clearly to establish a mountains retreat for his family where they could escape the summer heat and urban tumult of Sydney for a place of arcadian repose he chose to name Woodford.

As part of this process he created a network of local walking tracks that today comprise a vital part of the Blue Mountains' trail heritage ... more

Apart from being a man of means however, Fairfax was also a businessman who was casually described in a 1922 retrospective of Twenty Mile Hollow published in a Sydney newspaper article as being “a wholesale grocer of Sydney”.

This commercial side to Fairfax is useful in trying to understand what drove him to acquire the two vacant blocks of land immediately alongside his new 50 acre mountains’ property in the early 1870s. Given he had just gained a well established one acre orchard and 20 acres of ploughed and fenced fields, what need did he have for these extended holdings that today embrace almost the entirety of Woodford north of the railway line?

The answer here may well lie in the advertisement Fairfax later placed in March 1878 to employ an experienced fruit gardner at Woodford.

As Fairfax was in financial straits at that time, this was unlikely to have been a hobbyist venture, but rather a studied move to take advantage of commercial orchard plantings then starting to bear fruit on his substantial land holdings in the perfect fruit bearing climate of the mid mountains.

This is further evidenced by the 1882 Map of Woodford that appears to indicate the extent of the Fairfax orchard on the 40 acre block immediately east of the original Thomas Pembroke 50 acre holding that was home to Woodford House.

From the early 1870s Alfred Fairfax (the new owner of the newly named Woodford House) was contributing astronomical observations made at Woodford with his valuable 4 ½ inch Schroeder telescope to the Sydney Observatory.

In 1872 as the NSW Government Astronomer Henry Russell prepared NSW’s contribution to the global observation network recording the upcoming transit of the planet Venus across the face of the Sun in December 1874, he identified Woodford as one of the three regional observation sites (i.e. Woodford, Goulburn and Eden) needed to assist the Sydney Observatory.

In due course the portable observatory site was marked out on the ten acre holding recently acquired by Fairfax on the western edge of his main 50 acre property. There at the rear of the former police lockup, the transit was successfully observed on 9 December 1874.

While this event comprises a major landmark in Blue Mountains history, it was of little broader scientific significance in the overall international project to observe the transit from many different places across the globe.

It was left to a series of observations made at Woodford in 1878 to etch this location’s place into the annals of astronomy. It was in that year, closely watched by his colleagues in America, that Henry Russell undertook a series of observations to provide precision, calibrated test results assessing the then understood value of taking astronomical readings at altitude rather than at sea level.

He later noted that: “the gain which I have described was clearly owing to the fact that we were 2200 feet higher. Could one but look through a vacuum, many a question that takes years of patient labour to answer would be decided in a single glance.”

In this it could be said that his 1878 work at Woodford prefaced the placement of new observatories in high mountain areas as well as the launch of the Hubble telescope 112 years later to operate in the vacuum of space.

Alfred Fairfax’s fortunes were in decline by the end of the 1870s and his mountain retreat property at Woodford was mortgaged in 1877 to help tide his affairs along. This meant that while Fairfax remained the nominal owner of Woodford House and its surrounds for the next twenty years, he evolved into an absentee landlord as the property was put to work to help pay its way.

The legacy of the Fairfax’s investments at Woodford over the early 1870s helped to define this precinct over the coming decades. Most significantly it consolidated virtually all of the land at Woodford north of the railway line into a single holding, thereby putting aside its closer development through subdivision for the early years of the 20th century. This had significnat implications for Woodford's development as a town centre in the late 1800s ...more 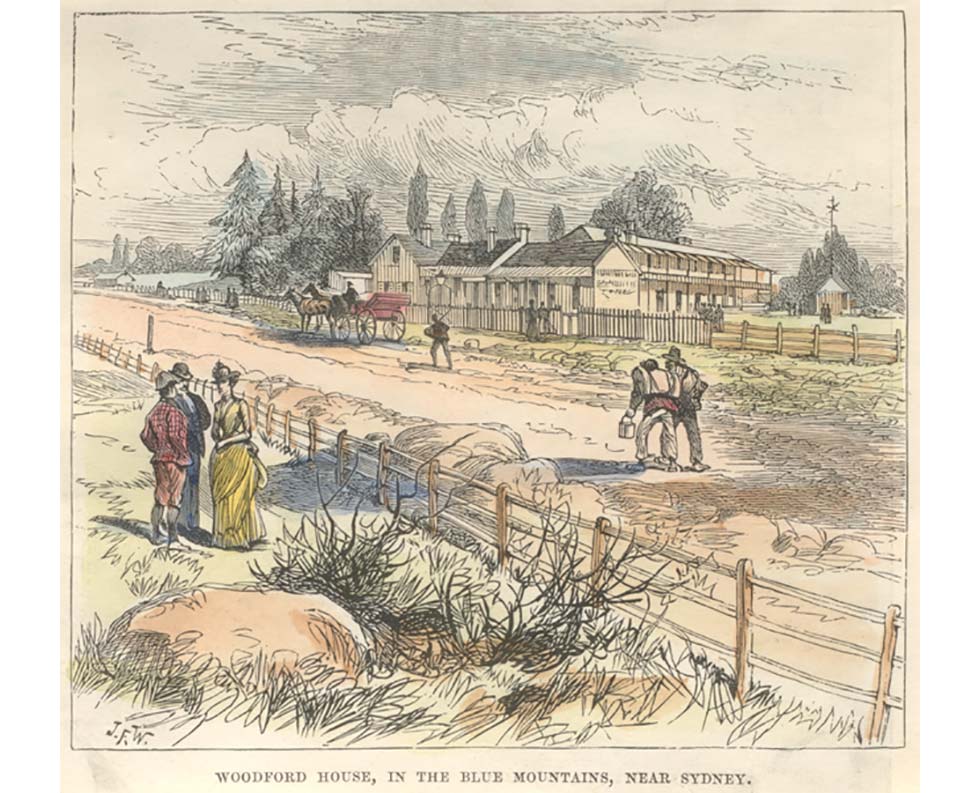 When Buss’ Inn closed down in 1868, the last guests through the door would likely have been stopping in for just an overnight stay while travelling along the Western Road.

When the re-badged Woodford House was opened to the public in 1881, its business proposition was vastly different. Now it offered a private boarding establishment for visitors where families etc could find superior accommodation. While that would have been true, it had been easier for Buss’ Inn to cater for large numbers of guests as people mostly only stayed for the night. Now that guests were invited to “board” there as part of an excursion to the mountains, extra beds were needed.

Accordingly the property was soon closed again in order to construct a second storey row of accommodation with a wide verandah over the top of the eastern kitchen wing. This structure can be clearly seen in the above 1889 sketch of Woodford House.

It was reopened in 1885 as the sanatorium of the Blue Mountains. The extensive additions had been completed, superior accommodation was on offer and an excellent table was assured thanks to a good supply of butter, eggs, milk and poultry.

In the wake of this refit, the property looked forward to a future that was to see it continue trading as a mountains guesthouse over the next twenty years even as the property changed hands in 1897 when it was sold for the sum of £2,100.

The breakup of the Woodford House estate traces back to 1896 when the renowned geologist Edgeworth David and his wife Cara bought an old cottage just to the west of Woodford House.

Originally marked on the 1882 map of Woodford, this weatherboard cottage was positioned immediately alongside the 10 acre block that formed the western portion of the Woodford House holding – the place where the transit of Venus observations had occurred in 1874. 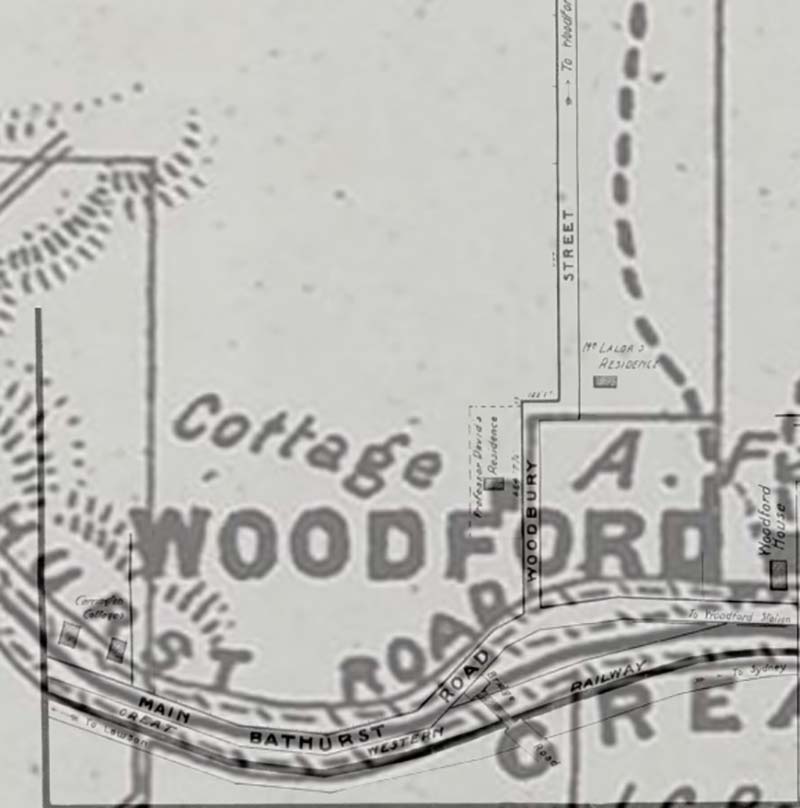 When the David’s acquired the cottage for use as a mountain’s summer house their 26 acre purchase included this parcel of land.

They named the property ‘Tyn-y-Coed’ (the ‘house in the trees) and after extending it they made it their primary residence from 1899 until the First World War when it was given over to the Red Cross to use as a convalescent home for wounded soldiers. After the war it remained as the David's favoured country retreat until Edgeworth’s death in 1934. The property was later destroyed by a bushfire in 1944.

While preserving much of the original native vegetation the couple and their children created an orchard with apples, pears, peaches, plums and other fruit, a hedge of Kentish cherries and hazels was planted, and they had their own cow and chickens. 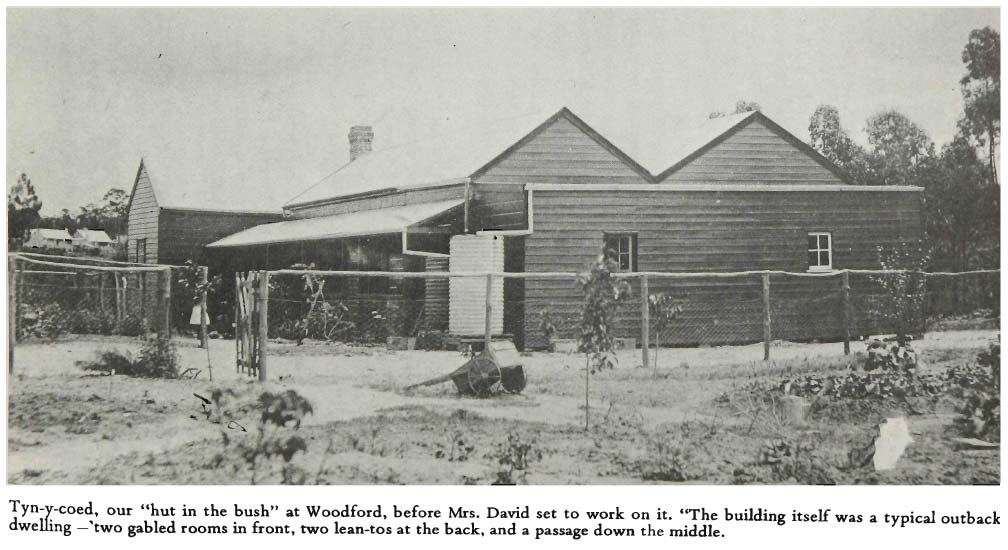 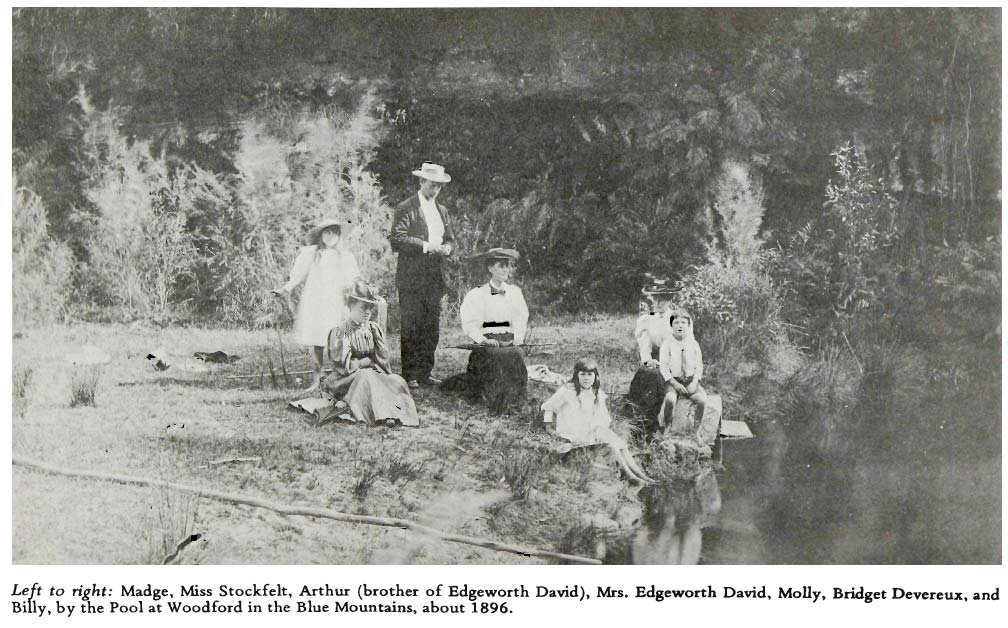 Photos from the book Passages of Time by Mary Edgeworth David 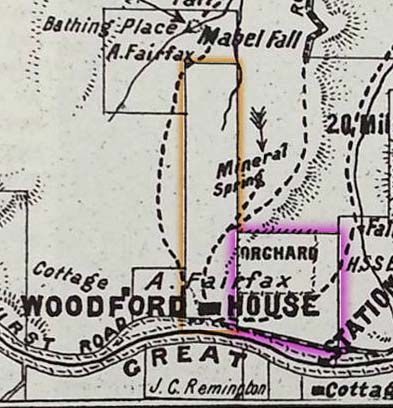 The sale of Alfred Fairfax’s Woodford House property as two blocks in 1897 was a dramatic event in the development of the village of Woodford at Twenty Mile Hollow.

The additional 40 acre block to the east that Fairfax had subsequently acquired for his orchard was separated out in this sale process. This left it free for closer subdivision and it was across this original block of land that the village centre of Woodford developed over the next ten years. The core 50 acre block of land Fairfax originally purchased from Bridget Buss in 1868 was sold intact for £2100.

Tracing out the change of land titles across this time makes for an intriguing challenge ... more 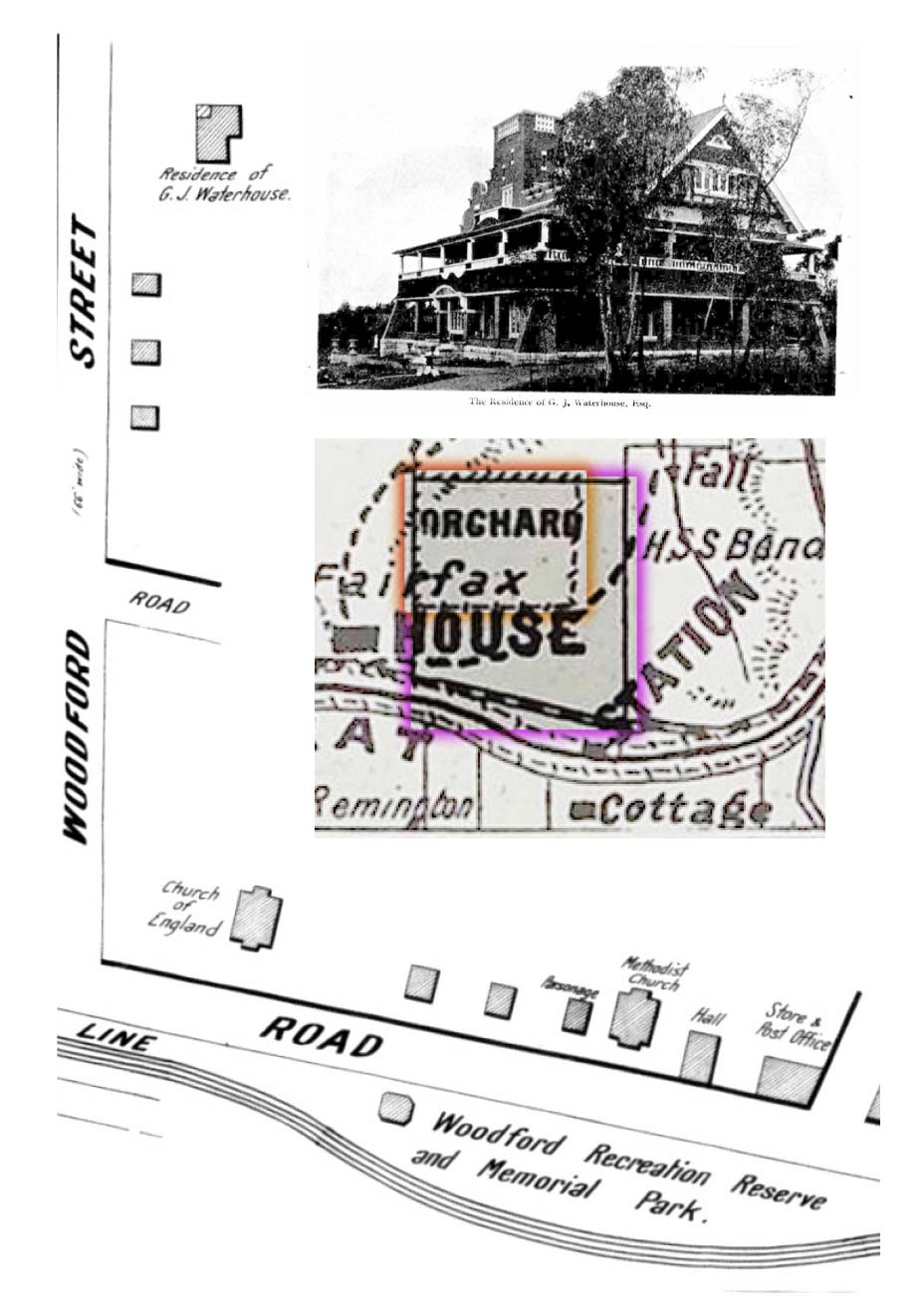 The impacts of the 1897 sale of the Fairfax holdings for Woodford took some years to realise.

The new owners continued to lease out the premises as a guest house and an advertisement in 1905 records that 90 acres of ground were still attached to Woodford House.

Thereafter however change came quickly. As the Blue Mountains Echo wrote in 1909:

“The Woodford of old has passed away and a new charming Woodford has taken its place. It is fast becoming recognised as an ideal place for a country residence and several representatives of the commercial and professional life of the metropolis have their homes in this delightful retreat. The residence just completed for G. J. Waterhouse Esq. which appears on this page will convey a better impression than any word picture can do of the general excellence and superiority of this house.”

Mary Jane Waterhouse and her husband Gustav’s feature property “Weroona” was constructed on the site of the Fairfax orchard in the northern portion of the 40 acre eastern allotment originally offered for sale in 1897.

The 1902 duplication of the railway line across the Blue Mountains provided a catalyst for the Woodford community to organise themselves into a progress association to advocate for the budding village’s interests.

The first iteration of this group was formed in April 1902 in response to the imminent plans to move the railway station from its then central position in the developing community hub opposite Lot 2 – the 40 acre holding that had originally comprised the eastern portion of the Fairfax estate.

The station had migrated down the hill to this more gently sloped location after a fire in 1888 had badly damaged the platform to the west. This had been located on a very steep 1:33 track section where trains had trouble pulling up while travelling downhill to Sydney.

While the Progress Association considered moving the station would be “inconvenient to the residents and prejudicial to the progress of Woodford” the Railway Commissioners already had their priorities set. In addition to creating a new siding for the station they had to effect improved vehicle and pedestrian crossings – “most of which are extremely hazardous in these parts.” 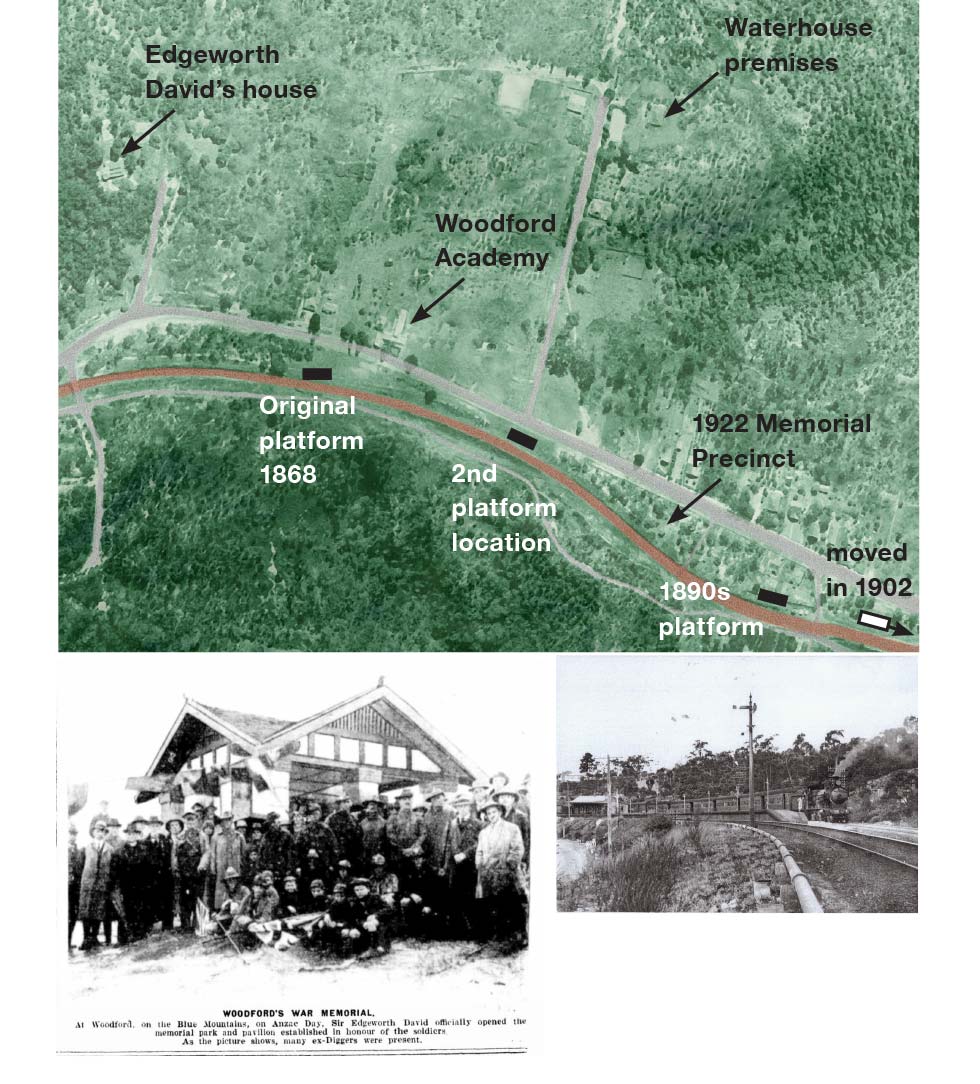 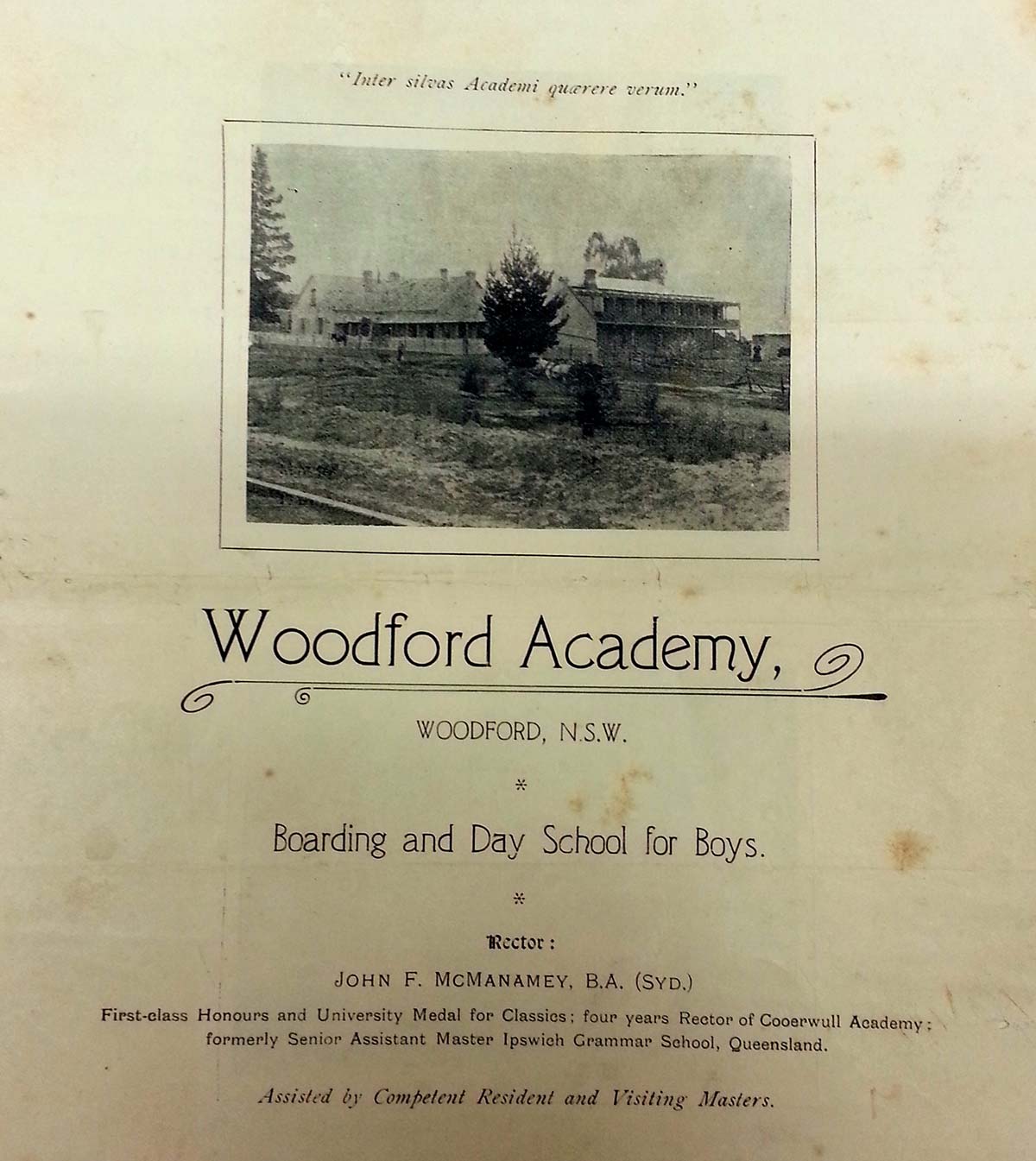 inter silvas academi quaerere verum:
Seek for Truth in the Garden of Academus.

In 1906 John McManamey was faced with the challenge of where to open a new school after his lease at Cooerwull Academy at Bowenfels could not be renewed.

He spied out the potential of adapting the Woodford House to his purpose and the following year Woodford Academy welcomed in the class of 1907. In choosing Woodford as the location to establish a high quality academy designed to cater to the most aspirational of families and students, McManamey would have been well aware of the favourable circumstances surrounding the new school.

Their neighbour to the west was one of the Australia’s pre-eminent geologists – Professor Edgeworth David. Then to the east lived Mary Waterhouse and her husband Gustavus. Mary was the daughter of one of Sydney’s most prominent businessmen Ebenezer Vickery while Gustavus Waterhouse was in 1909 the President of Blue Mountains Shire. His presence chairing the Academy’s first prize giving ceremony in December 1907 would have helped affirm the Academy’s credentials. 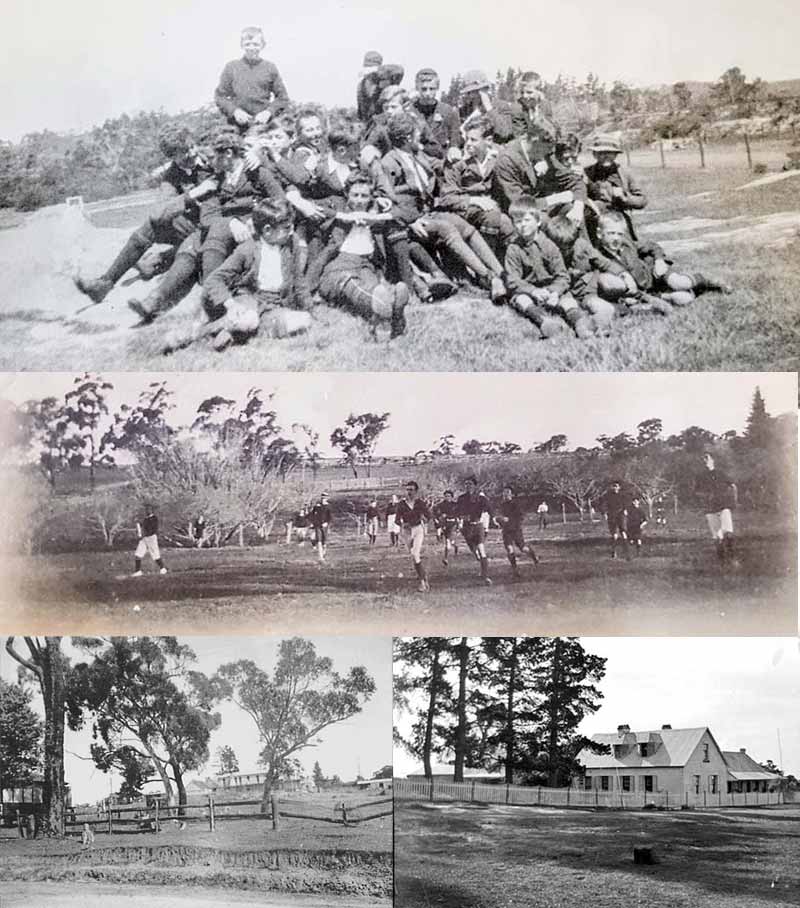 Following his purchase of the 12 acre property containing Woodford House in 1914, McManamey offered up 18 residential allotments along the southern and western side of his property for sale in 1925. 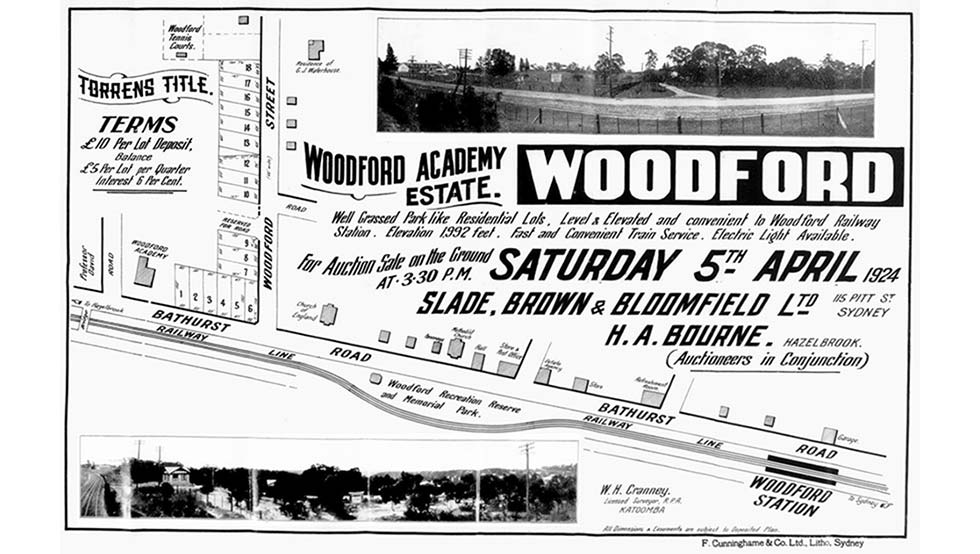