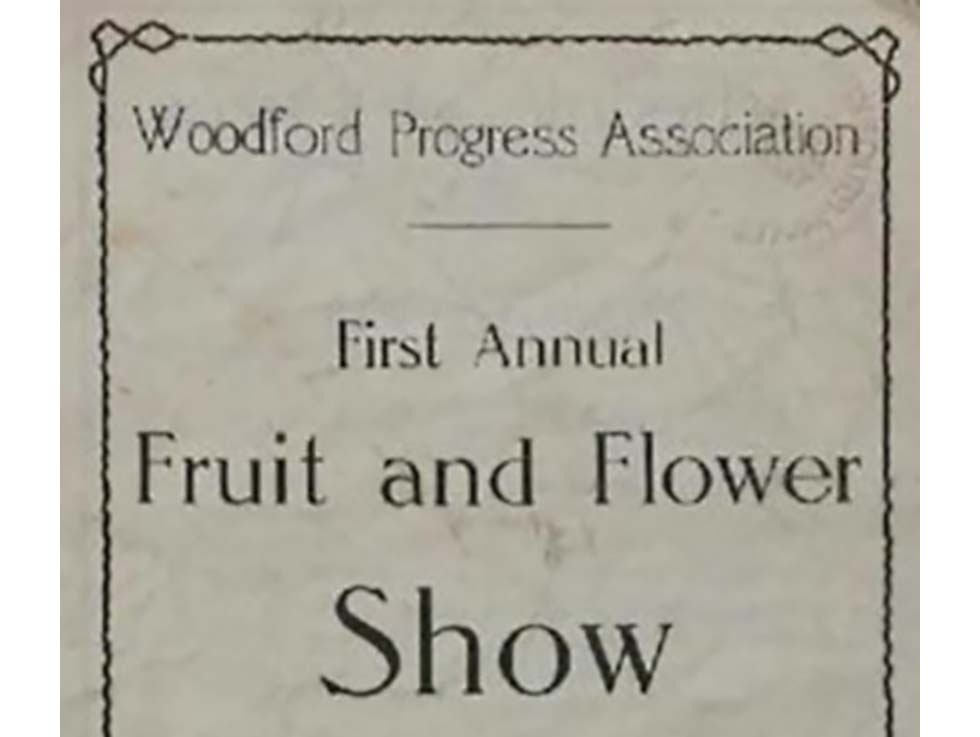 The Blue Mountains Echo noted in February 1917 that this group formed a Progress Association the object being ‘to formulate plans for enhancement of the District'.

Waterhouse was elected President and he with others played a significant role in the early 20th C in Woodford. Gustavus John Waterhouse (1850-1929) was born in Tasmania, son of Rev Jabez Waterhouse and grandson of Rev John Waterhouse the first superintendent of the Wesleyan Mission in Tasmania. He was a mercantile businessman, broker, shipping agent and Sydney City Council and Waverley Council alderman.

Mary Jane Waterhouse was the daughter of financier Ebenezer Vickery, and an astute business woman, praised for her philanthropy and charitable works.

Their eldest son Gustavus Athol Waterhouse (1877-1950) became an eminent entomologist; the second son Eben Gowrie Waterhouse (1881-1977) was a professor of literature and languages at Sydney University and an authority of camellias. E.G Waterhouse’s former home in Gordon is now the well-known historic house and garden ‘Eryldene’.

In May 1905 Gustavus and his wife retired to Woodford and in 1909 built a property called Weroona. It was a significant home and although damaged by a bushfire in the 1940s, continued on as a boys home.

The main house was destroyed by bushfire in 1957 with only a few outbuildings surviving. Gustavus and his wife made significant contributions to the community initially in Waverley and subsequently in Woodford, particularly through their activities with the Methodist Church as he was a layman and benefactor.

A stained glass window in the heritage listed Woodford Methodist Church, which is opposite Woodford Memorial Park on the GWH, commemorates his and his wife’s interest and generosity. Ken Goodlet in his history of Hazelbrook and Woodford notes that the formation of the Progress Association and its key objective was seen by the local press at the time “as marking an epoch on the history of this charming town”.

There are a number of inter-related elements to consider as part of the Memorial Park, including the Reserve itself, the Soldier’s Memorial, the shelter shed, railway footbridge and Wilson Glen and walking tracks on the southern side of the railway footbridge.

After the establishment of the Progress Association, Ken Goodlet notes that the Woodford Group of the ‘Blue Mountains Sights Reserves’ commenced with most of their early attention going into the Woodford Memorial Park and much of the cost being paid as a loan by Gustavus Waterhouse.

The Blue Mountains Echo in December 1917 notes that “The Woodford Progress Association is making good progress. Many works to enhance the popularity of the district have been carried out and tracks have been laid out to the various sylvian retreats on the outskirts of the township.

Arrangements are being made to convert the triangular block of land opposite Murphy’s Store (Woodford Academy) into a children’s playground and memorial park in honour of the lads who have served their King and country.

The Association also intends petitioning the powers that be for the strip of Reserve running from the railway siding to the overhead bridge for the purpose of converting it into a recreation reserve. Mr G.J. Waterhouse, with customary generosity, has promised to give ornamental trees for planting in selected sights in the township, thus giving practical assistance in beatifying Woodford” (BME 14/12/1916)

In a subsequent Blue Mountains Echo article on 19th April 1918 notes that “we are informed that the Progress Association has applied for the triangular corner piece of land in the main street, near the Station Master’s residence for the purpose of erecting a memorial monument to our fallen comrades, and otherwise beautifying it”.

By July 1918 the Progress were awaiting a favourable response from the Railway Commissioners and “were engaged in planting trees in the main street, and soon Woodford’s boulevard should be an accomplished fact”. The slightly differing alignments of the Western Road and the Western Railway through Woodford had created a long narrow Reserve (R55).

In September 1919, part of this section of Reserve 55 was notified as a Reserve for Public Recreation. There appears to have been discussions between the Railway Department and Blue Mountains Shire Council at that time regarding the width of railway land impacted by the proposed Reserve and Western Road but with assistance from G.J Waterhouse Council refused appropriation of the land in favour of the Blue Mountains Sight Reserves and Progress Association. Progressive occupancy was given to the Trustees.

This is indicative of the strength of support the Woodford community were being given to establish their Parks and Reserves.

The Woodford Memorial Park footbridge was officially opened after the local community had raised part of the funds needed for its construction. The engineering drawing for the bridge was done in May 1920 (ARH March 2016). The importance of the new footbridge to the Woodford community and the well-attended public opening is evident in the detailed article in the Blue Mountains Echo on 3rd December 1920.

The Public Reserve and walking tracks that the bridge provided pedestrian access to on the southern side of the rail line appears to have been gazetted as a ‘Public Reserve’ as early as 1880.