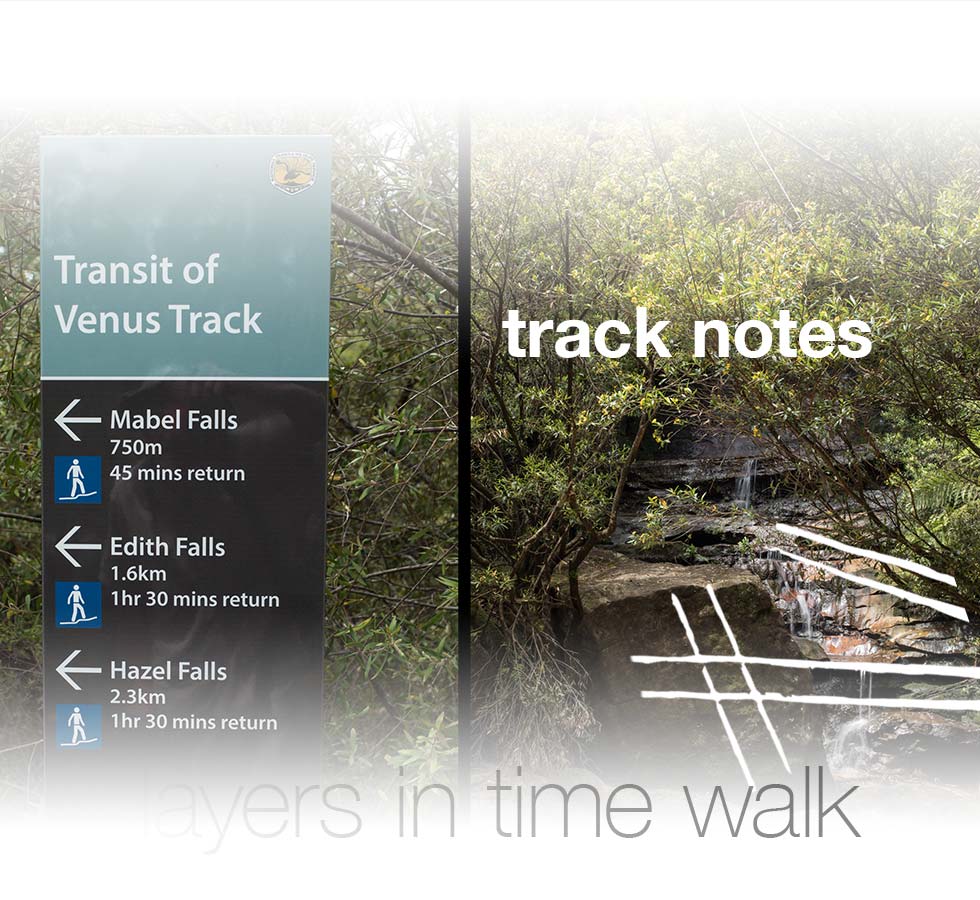 From the Weroona Ave/Woodbury St junction you can follow Woodford St northwards and walk the historic Transit of Venus track.

300m down the road, the track turns off on the right at a small carpark and information shelter. From here it’s a moderate 4.5km walk to take in all three waterfalls: Mabel, Edith and Hazel. The track is signposted at most junctions. 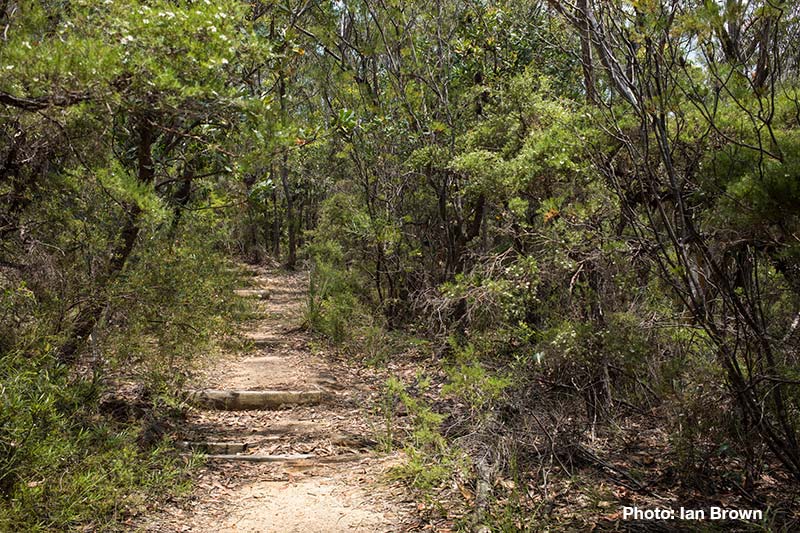 The Transit of Venus track

This is a beautiful and moderate 4.5 km walk that takes in three waterfalls. The bush is mostly open forest with scribbly gums and lots of wildflowers and birds, with rainforest species along the creeks and areas of shrubby swampland.

The ‘hanging gardens’ on the cliffs around the waterfalls are a highlight. 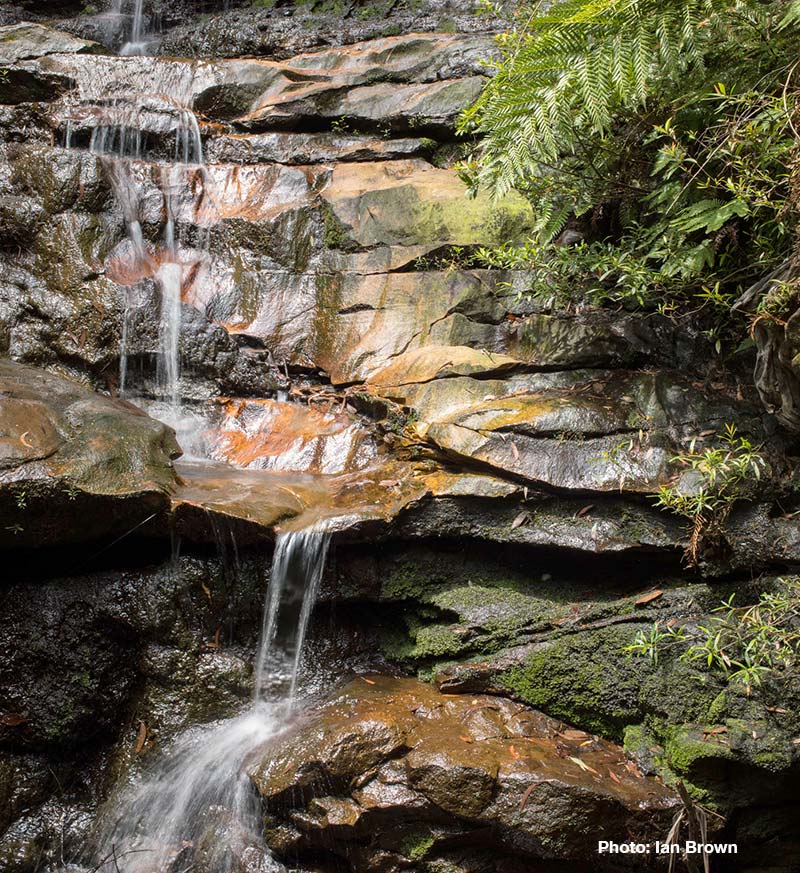 The track is best walked from the trackhead on Woodbury Ave.

You can come back the same way or divert along the fire trail, and even make it a ‘figure eight’ circuit via the Woodford Ave fire trail and Weroona Ave.

History of the Transit of Venus track

This walking track was originally constructed in the 1870s under the direction of Alfred Fairfax who owned the historic Woodford House (now Woodford Academy) estate. It was one of the earliest walking tracks developed for recreation in the Blue Mountains and part of a fashion amongst wealthy gentlemen of the time to have mountain estates and to build tracks to attractive features in the adjoining bushland. 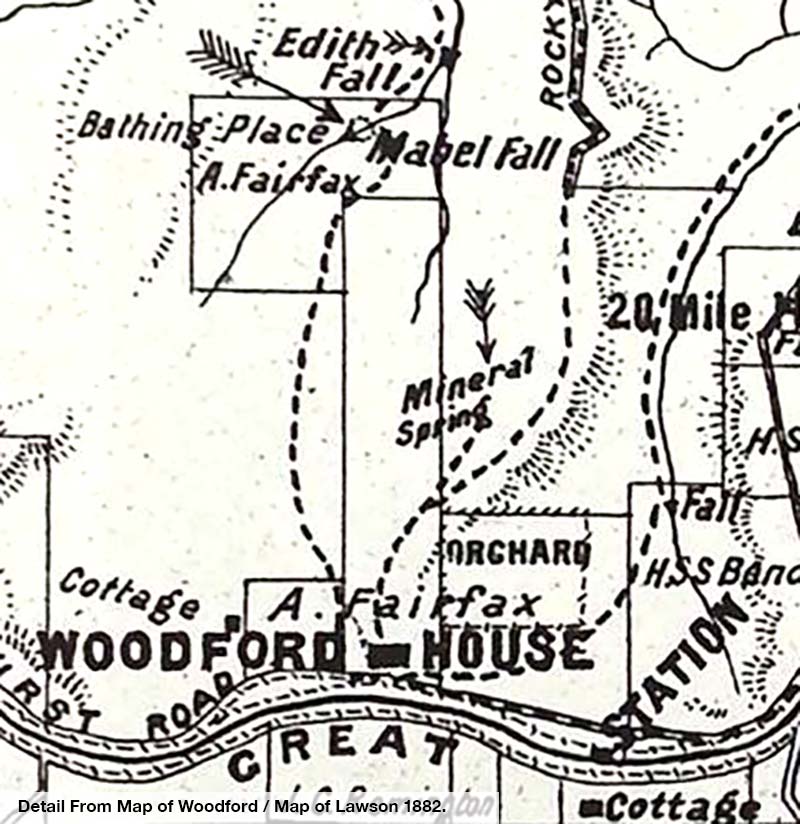 The track is not known to have had a name, but was later referred to as the ‘three falls track’. It originally started from Woodford House and followed Woodford Creek down past Mabel Falls, Edith Falls and others, all the way down to the junction with Bulls Creek, then upstream along Bulls Creek and back to Woodford House – about 8 km in all.

The track was later advertised as one of Woodford’s attractions but it is not known how much tourist use it received.

When the Woodford Academy was operating as a school, up until 1925, the students were required to run down to Mabel Falls for a morning dip, but by 1937 the track was referred to in a newspaper report as the ‘supposed track’. 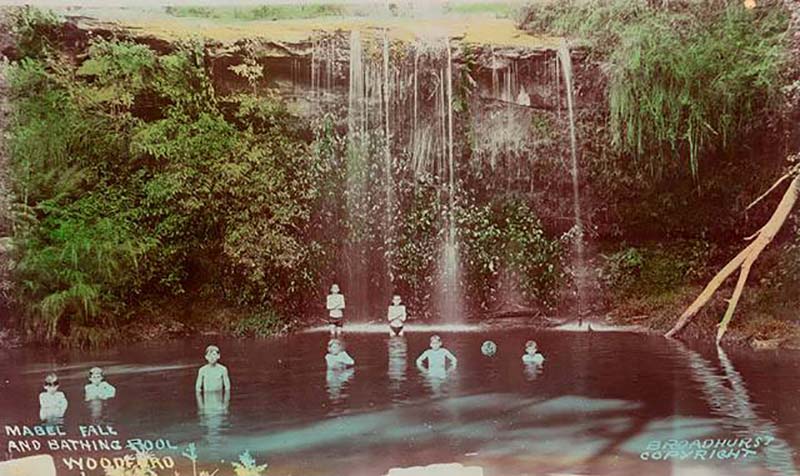 Earlier, the long circuit via Woodford and Bulls Creeks had been flooded when the local council constructed Woodford Dam in 1928. Around the same period, the extension to Hazel Falls was constructed, as it first appears on a map in 1938. 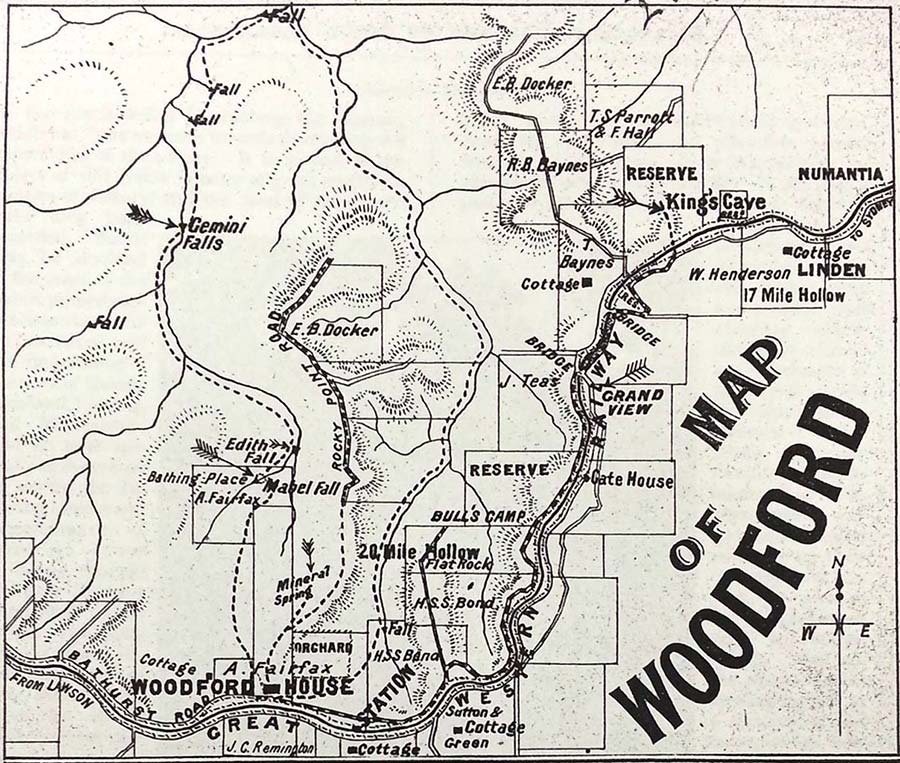 In the 1950s the track was cut in several places by fire trails. The Water Board took over the dam and catchment in 1980, and rebuilt the track to the three falls in 1991, partly funded by Blue Mountains Conservation Society.

The Society suggested the track be named Transit of Venus, to commemorate the astronomical observations from Woodford House in 1874. In the 1990s the Water Board dismantled the historic ‘swimming pool’ at Mabel Falls (often incorrectly referred to as being of ‘convict’ origin). The sandstone blocks can still be seen.

The ownership of the land has gone through many changes. The area containing the three falls was gazetted as Waterhouse Park in 1917, and the park was enlarged in 1930 when the Waterhouse family donated 40 acres to Blue Mountains Shire.

In 2018, Waterhouse Park is smaller but still contains Mabel Falls. All the land to the north with most of the Transit of Venus track and the Woodford Catchment is now within Blue Mountains National Park. The track connection to Woodford Academy (House) has been lost under suburbia, but we can be grateful that some of the track has survived and is now available to all. 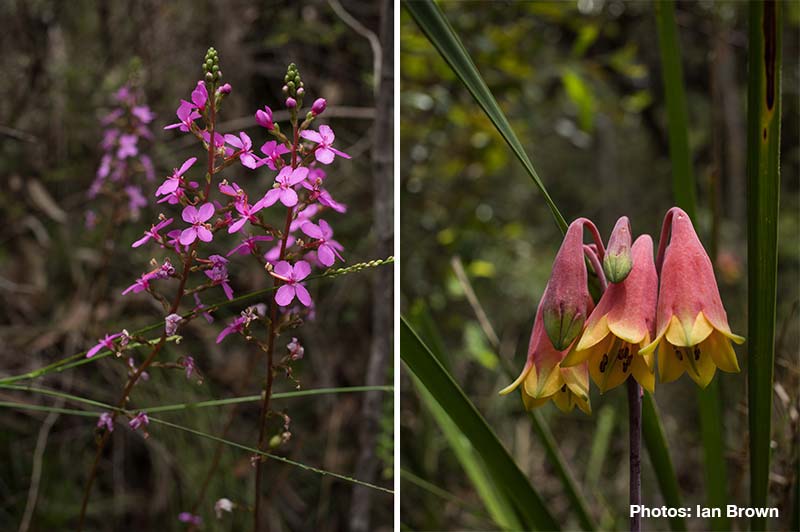